When an authoritarian government is enthroned in power as a result of a centralizing process (even when it happens through a democratic electoral system), it is very likely that it will drift towards a dictatorship through the application of double standards in the justice system, as well as when legislative work abandons

negotiation to impose a one-sided rule by a simple majority.

The worst part of the equation is to fall into a double standard of justice because it turns into an ideal tool to carry out political revenge or to stifle the mechanisms of opposition or protest. This happens when the prosecution responds to the interests of the party in power and the judges abandon their impartiality to adopt politicized positions.

No country is immune from this insidious slide toward dictatorship. Particularly if the party in power manages to influence or even control the press and media to the extent where they conceal or distort this ongoing erosion of the rule of law.

This is the tragic reality that we are currently seeing in the United States.

The buffoonish riot at the Capitol on January 6, 2021, is sometimes used as evidence of an insurrectional right-wing (or even fascist) movement. However, the prosecutors in charge of the one-day riotous uproar could not uncover any armed revolutionaries or government-overthrow plans other than trespassing and/or causing damage to government property. In fact, the demonstration completely failed in its objective of protesting what they considered electoral fraud. What the riot actually accomplished was to provide a pretext for the neo-socialist faction –so-called "progressist"–, which is slowly gaining control, to take harsh reprisals against protesters, to militarize the nation's capital with barbed wire and tens of thousands of federal troops — the most since the Civil War. Ah, but this is not war!

Unfortunately, the hundreds of detainees, most of them arrested days after the riot, have not been granted the procedural rights that are common in these cases. Many have been imprisoned for more than 18 months without trial, and there are multiple cases of abuse, both physical and mental, with the alleged purpose of submitting them to a settlement by pleading guilty to the charges.

A case in point is the assertion made by Christopher Quaglin's lawyer, Joseph McBride, that Quaglin has been held for more than 18 months in Northern Neck Regional Jail while awaiting trial and is not receiving a special diet or adequate medical attention for his celiac disease, an autoimmune condition that can cause damage to the small intestine if gluten-containing foods are consumed.

There are a lot of human rights abuse allegations inflicted on the January 6 defendants, and this report is just one of the hundreds of cases. In other cases, prisoners in federal custody are described as having been physically assaulted by prison guards, denied healthy food, and denied essential medical care. In reality, Attorney McBride compared the Jan. 6 prisoners' conditions to that at "Guantanamo Bay," claiming that the inmates are detained in solitary confinement for up to 24 hours a day and treated by jail officers like "domestic terrorists."

In contrast, the Antifa and Black Lives Matter rioters were no one-day buffoons. Indeed, in the summer of 2020, during the presidential election campaign, they planned a series of violent and deadly riots across the nation over a period of more than four months. More than 35 people died as a result of their work, $2 billion in property was lost, and numerous police officers were injured.

However, the vast majority of those arrested for these acts of proven criminal terrorism were dismissed. Many more involved minors who were finally released home from family court, while others had convictions for lesser offenses like trespassing, which carry no jail time. In addition, the courts and the prosecutors in each of these cases moved swiftly; no detainees remained in custody for months on end, much less for more than 18 months.

What interpretation other than the blatant use of a double standard by the legal system is there? 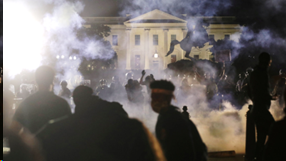 If that were not enough to condemn what is going on, one must also take into account the fact that, among other things, such violent demonstrators torched the iconic St. John’s Episcopal Church and attempted to fight their way and storm into the White House grounds. Their violent agenda prompted the Secret Service to evacuate President Trump to a secure bunker out of fear for his life.

Not surprisingly, The New York Times joyously praised the rioting near the White House grounds with the snarky headline “Trump Shrinks Back.”

Without a doubt, there is a double standard at play here. Human rights are being violated and fairness in the judicial system is being eroded.

back to top
It is the duty of every citizen according to his best capacities to give validity to his convictions in political affairs.
Albert Einstein

Your valued donation helps to offset the cost of maintaining this site & its goal of promoting democracy & human rights.
We do not receive funds from any government or institution. Any amount in any major currency, from $1 up, makes a difference! It means that you care.
Just click on the Donate button to access PAYPAL:

PAYPAL is a safe & easy way to contribute. You may use your credit card too.
Thanks for your generous donation!
For more info: gerama721@yahoo.com

We have 789 guests and no members online