The killings of environmental and land rights activists worldwide has tripled over the past decade. The death rate is now an average of more than four per week. Almost none of the killers have faced charges. Front Line Defenders has learned with great sadness and concern about the killing of land and environment defender Joanna Stutchbury, who died on Thursday, 15 July 2021. Initial reports indicate that the woman human right defender was fatally shot in the afternoon as she returned to her home on the outskirts of Nairobi, Kenya. In the global resource wars, “those people” appear as expendable shadow beings, weighing almost nothing in the grand scheme of things. We are witnessing an epidemic of environmental martyrdom, particularly in earth’s vital but embattled tropical forests. 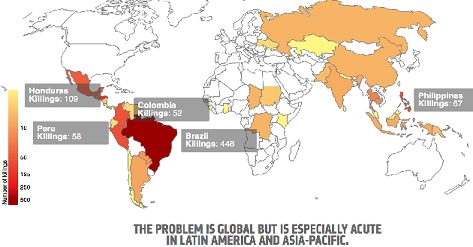 A record 227 people were killed worldwide in 2020 for their defense of nature -- more than four a week on average, and almost three-quarters of them in Latin America, environmental rights organization Global Witness said Sunday.

Sept. 13.– For the second year in a row, Colombia was the country with the highest number of killings -- 65 -- while Nicaragua had the highest per-capita rate, with 12 murders up from five in 2019, the group said in its annual report.

Seven of the 10 deadliest countries for land and environmental defenders were in Latin America, with 165 killings recorded, though Global Witness said the number was "almost certainly" an underestimate.

After Colombia, Mexico had the second highest number of deaths globally, with 30.

Please, help with your valued donation to offset the cost of maintaining this site and to assist us in our quest for democracy and human rights.
This site does not receive funds from any government or institution. Any amount in any major currency, from $1 up, makes a difference!
Just write down your generous donation to Democracy in the space below:

PAYPAL is the safer & easier way to contribute. You may use your credit card too.
Thanks for your generous donation!
For more info: libertad@democraciaparticipativa.net

Tibet in Chains: The Stories of Nine Tibetan Nuns

Tibet in Chains: The Stories of Nine Tibetan Nuns Compiled by the International Campaign for Tibet Amazon: KindleBarnes & Noble: NookUS$0.99 to download In the early 1990s, the notorious prisons in the Tibetan...

We have 419 guests and no members online